May the 4th Be With You: Graphic Designer Andreas Clausen on the Star Wars Fan Film ‘The Last Padawan’

A long time ago in a galaxy far, far away… Actually, it was just a couple of months back when Danish actor and filmmaker Jesper Tønnes released his live action Star Wars fan film ‘The Last Padawan’ to the public.
The story of a young Jedi on his quest to assemble his lightsaber has received unanimous praise from the community, currently sporting over 660,000 views on YouTube.

To celebrate Star Wars Day, we had the chance to talk with the film’s visual effects supervisor, Andreas Clausen.

While Andreas credits Jesper Tønnes as the driving force behind the project, ‘The Last Padawan’ is very much a team effort not only of dedicated fans but talented filmmakers, actors, musicians and VFX artists.

Being set in the Star Wars universe, there was no shortage of work for the latter: From the gigantic spaceships in the opening sequence to minutiae compositional details, Andreas Clausen had plenty to do: “I was working with two other designers to make the special effects. One to help with texturing, the other was working with the director on rough animations.”

Most of the CGI seen in the film was made in Cinema 4D and Adobe After Effects. In addition, Andreas used Photoshop “for retouching textures and importing test rendered single frames of my scene to do quick Color Grading tests ensuring that we're on the right track, lighting wise.” 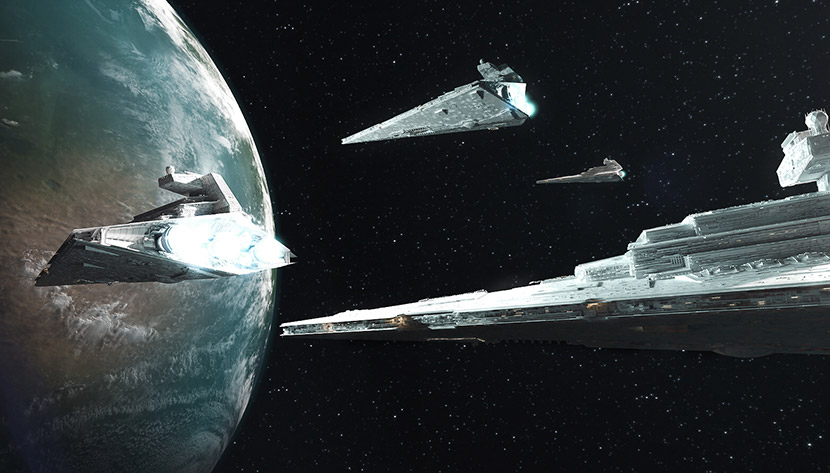 Andreas tells us he has always had a thing for technology and creativity, recounting his initial reaction when a friend first showed him Adobe Photoshop 5 back in late 1998:
“YOU CAN MAKE CIRCLES AND DRAW SQUIGGLY LINES WITH YOUR MOUSE?! I was hooked instantly!”

The passion for digital art has led him to pursue a career as graphic designer and digital art director, eventually founding his own studio, NUCAVI Designs, in 2008 – and he hasn’t looked back since: “It's fun, I love it and wouldn't trade for anything in the world!”

When asked what he finds most appealing about the cultural phenomenon that is Star Wars, Andreas immediately cites the fandom. “The attention to detail within this community is tremendous – be it the lore or authenticity of VFX.”

But working within the realms of an established franchise with a dedicated following also poses its own set of challenges, namely coming under very close scrutiny online. “People on the internet do not know you and consequently will not hesitate to tell you what you’ve done wrong”, Andreas says. In turn, he all the more values the approval of the Star Wars community.

From storyboarding to the final render, the team put an entire year worth of time and energy into the project. “RebusFarm was key for us to get done on time, as rendering on our own machine would’ve taken up to two months”, Andreas summarizes his experience with our render service, being especially impressed with the RebusFarm Software, its intuitive use and its seamless integration into Cinema 4D.

Although ‘The Last Padawan’ might not be able to compete with the main entries in the Star Wars series for obvious reasons, it nonetheless manages to capture the feeling and magic of the original movies.
An equally charming and impressively crafted love letter to one of the most beloved sci-fi franchises of our time, ‘The Last Padawan’ is a must-see for fans and aspiring filmmakers alike.