Don’t let the publication date fool you: Jack Malone, our April 2021 3D Artist of the Month, is the real deal! Hailing from Brazil, the senior character artist is fully committed to his craft, evident by his excellent work for the films and gaming industries. Extremely stylish and creative, yet realistic in appearance, his personal projects further underline his holistic approach to character design. Jack’s latest piece, the proud jungle warrior ‘OLAKUNDE’, is no exception!

Check out our interview to learn more about Jack’s professional background and the story behind his much acclaimed most recent work. 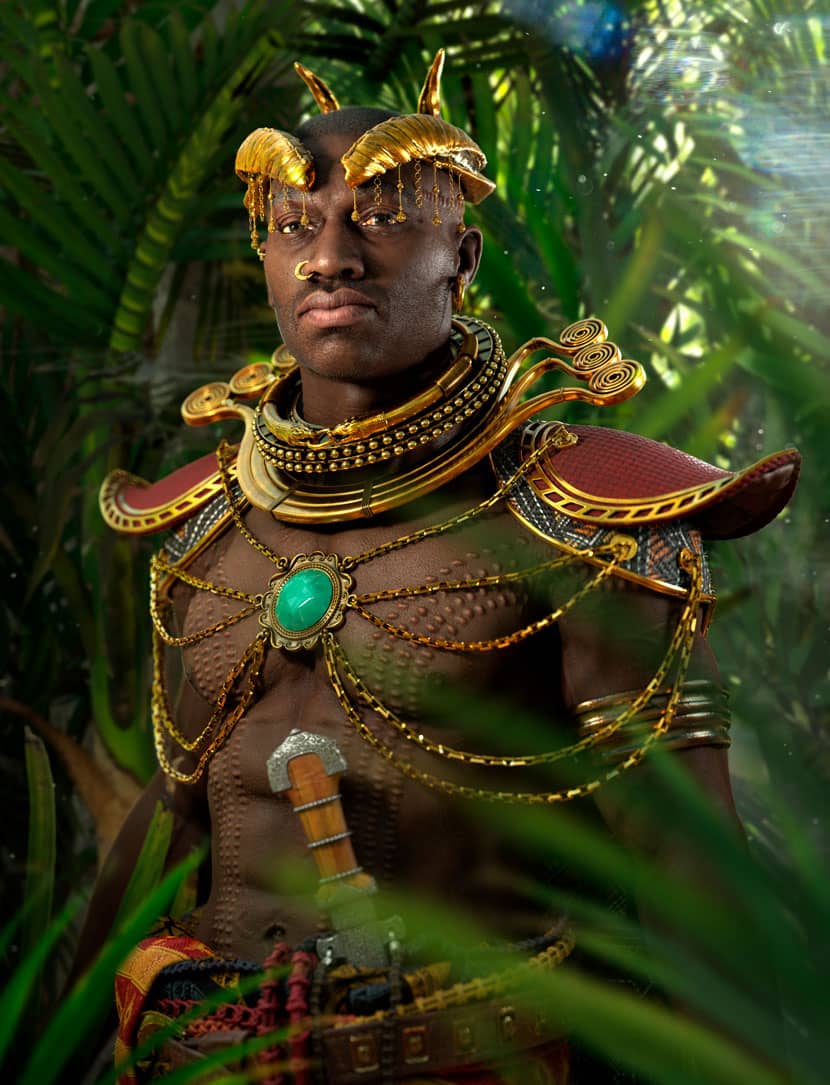 Hi Márcio – or would you rather we called you Jack?

Hey there, Jack is fine! It’s kind of funny, my friend started calling me Jack back in 2004 as a joke, but eventually it just stuck. In fact, I’ve gotten so used to it that it actually feels strange being called by my real name nowadays!

Now then, Jack, thank you so much for joining us today. Besides your name, what else should we know about you?

Well, my real name is Márcio Miranda, although I almost exclusively go by Jack Malone these days. More importantly though, I’m a 37-years-old 3D character artist from Brazil.

With the proper introductions out of the way, please tell us about your professional background. Do you recall when you first consciously encountered CGI?

My history with CGI goes all the way back to 1993, when I watched ‘Jurassic Park’ for the first time – that movie just blew my mind. Funnily enough, I initially didn’t even realize the dinosaurs were computer-animated! Once I was clued in, I became obsessed to understand this magical technology.

However, it wasn’t until my first semester at university that I had the opportunity to try my own hands at it. As a graphic design student, 2D animation was part of my curriculum, which eventually led me to 3D as well. I’ve always been passionate about traditional animation, so merging this preexisting interest with my newfound fascination for computer graphics felt like the logical next step.

So, I just took a ton of different workshops and courses to find out which direction I wanted to go in after graduating. Once I received my post degree in marketing in 2010, I started my first job in the industry! 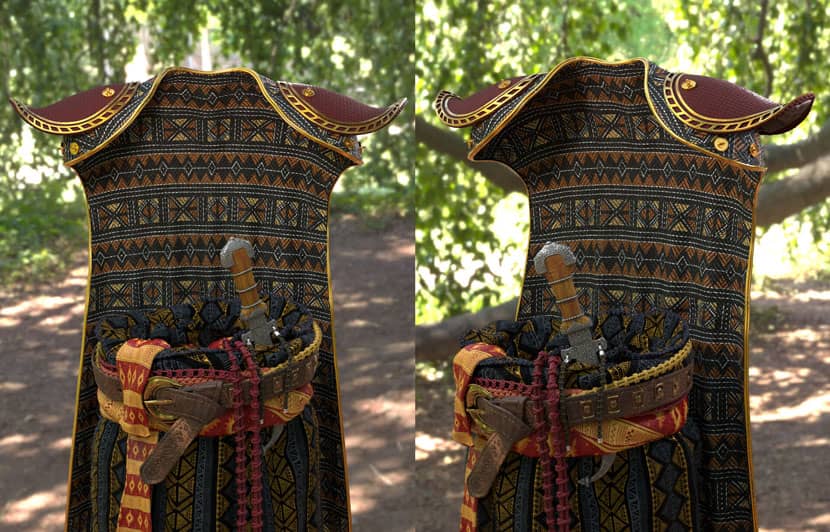 Only partly visible from the front, ‘OLAKUNDE’ is adorned with an elaborate costume and various accessories.

What were some of your personal highlights of your career thus far or projects you particularly enjoyed working on in the past?

Working on some of the opening titles for the 2014 FIFA World Cup and the 2016 Olympic Games, which were both held here in Brazil, without a doubt! I also had the opportunity to work on some of the iconic characters from ‘Street Fighter V’, back when I was living in Malaysia.

Jumping into the present, please tell us about your current job as senior character artist at Magic Media.

Sure! Magic Media is an international media and entertainment group, home to professionals and industry-leading experts across all avenues, from interactive entertainment, software, application and game development to cybersecurity, VFX, art and animation. We work for a wide array of domestic and international clients, including Bethesda, Blowfish Studios and Devoted Studios amongst others.

What are your main responsibilities as senior character artist?

I create 3D character models for films and video games based on original concept art. I work closely with the creative and technical teams to drive the visual quality of the project and maintain a consistent character style.

In how far does bringing a 3D character to life require a team effort?

I’d say it’s crucial. While working, I am in constant contact with both the art director and the lead character artist. We collaborate on the style, scope, and polish of the overall work. We also research reference material suitable for the aesthetics and genre of the project.

On top of that, I also work with the post-production and visual effects teams to ensure a seamless integration into the overall production schedule, which includes maintaining project documentation, assisting in problem-solving, and much more.

As a group, we always aim for best practices and seek out new software, technologies, and resources that will guarantee the most efficient workflow.

Make sure to check out Jack’s ArtStation for a more detailed project breakdown.

As a 3D character artist, is there a specific design philosophy or school of thought you adhere to? What inspires you as a 3D artist?

The foundation of my work lies in photography, movies, and traditional sculpture. The likes of Cartier-Bresson, Almodóvar, and Rodin are prime examples of what I'm looking for as an artist, which is a holistic approach. I always aim for more than a simple model: in my work, I’m committed to bring different artistic qualities together, emphasizing composition, design, and art direction.

How are you holding up in these trying times? Has the current crisis impeded your work?

The pandemic led to an explosion in game productions – I don't remember ever seeing so many new projects being launched as today. The industry has adapted well to home office. Besides, for most of us, working remotely is not as much of a change as in other fields: I’ve been working with a team spread across five different countries; with the proper routines, it does not affect the process.

Let’s talk about your most recent character ‘OLAKUNDE’ in more detail! Can you first tell us about the origins of the project?

‘OLAKUNDE’, the name of the project, translates to "the brave (has) arrived" from Yoruba, a West African language that is prominently spoken in Nigeria, Benin and Togo. My initial goal was to create a glamorous, yet realistic piece, something you would not immediately be able to clearly recognize as a computer-generated image.

Africa is home to such rich and diverse aesthetics, it’s really fascinating. With 54 countries on one continent, and even more cultures, there are so many different and unique visual styles to be discovered!

How did you approach the character in terms of visual design?

I imagined OLAKUNDE as a West African leader and founder of a dynasty. His skin carvings represent all the warriors he defeated in battle. To visually convey his standing, I clad him in as much gold as possible. Meanwhile, the use of complementary colors establishes a contrast with the jungle background.

Can you briefly walk us through the production process?

After extensive research, I started by making a raw sculpture to understand the anatomical proportions and the design of the assets. I did the UVs with as many UDIMs as I could to get a wonderful texture resolution.

Next, I worked on the body texture in ZBrush, using its HD Geometry tool and the asset textures in Substance Painter. Ultimately, I assembled everything in Maya and rendered it with Arnold.

All in all, this project took me about two months of working in my spare time between commercial jobs.

Are you satisfied with the results? What has the feedback been like so far?

Yes! I am extremely satisfied with ‘OLAKUNDE’, finally nailing the design felt so rewarding! The project has received quite a bit of attention, and the feedback from the CG community has been awesome. 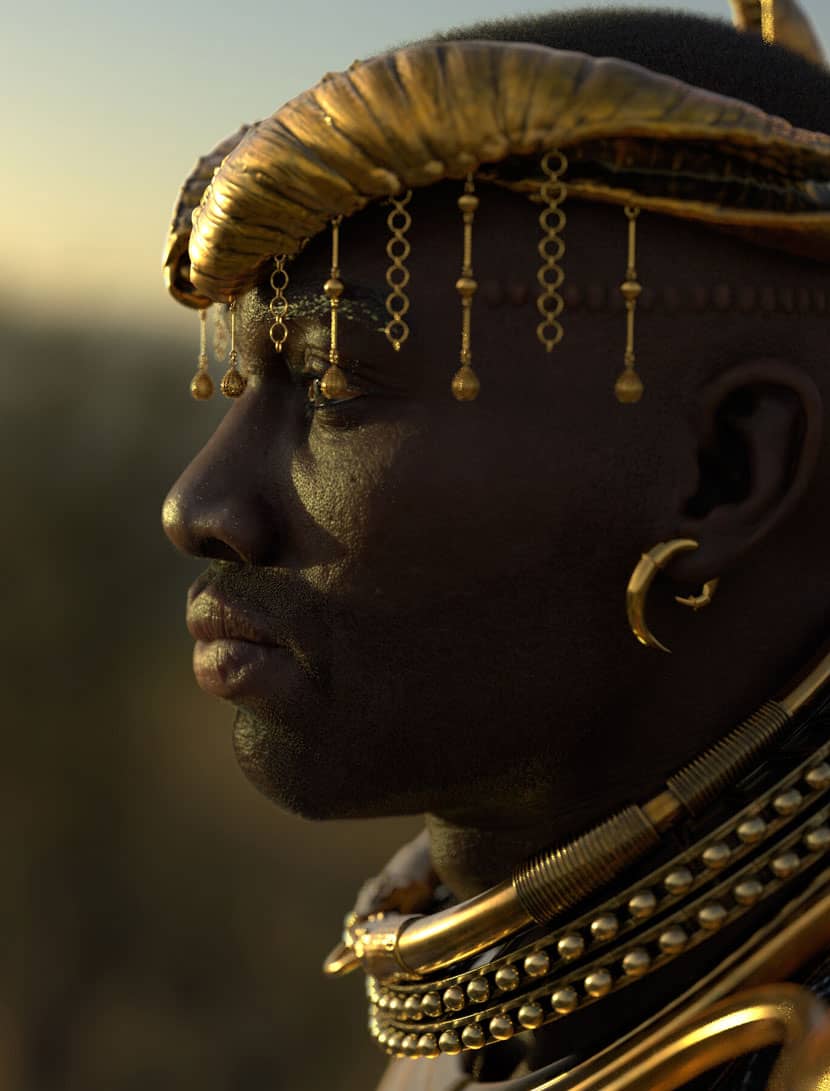 This profile shot highlights Jack’s texture work on the intricate headgear and the character itself.

Generally speaking, how important are personal projects to you as a 3D artist?

For one reason or another, we’re often unable to share our commercial work publicly. This is why personal projects are so important, they help to maintain visibility and bridge potential gaps in the portfolio. Of course, they’re also an outlet for pure artistic expression: there are no chains holding you back, the only limits are those of your own creativity!

Have you used RebusFarm before? If so, please tell us about your overall experience. Is there anything you especially like about our service?

RebusFarm is an integral part of my work, most, if not all the cinematics that I have worked on were rendered through your service. When I was doing work for the Brazilian television network Rede Globo, I also used RebusFarm all the time, we’re talking tons and tons of renders!

Is there anything else you would like to say before we wrap things up? Any shoutouts, plugs or upcoming projects you’d like to mention?

I’m quite active on ArtStation or Instagram, so check these out if you want to keep up with my work. And if you want to get in touch, feel free to shoot me an This email address is being protected from spambots. You need JavaScript enabled to view it.. Thanks!

Jack, thank you so much for taking the time and all the best in the future!

Keep up with Jack Malone and his work here: