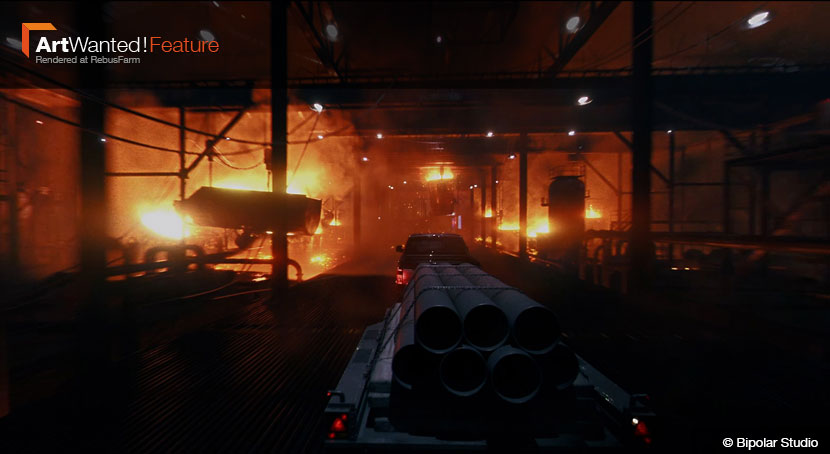 The NFL Super Bowl is one of the biggest sport events on the planet. With global viewership in the hundred millions, the final game of the U.S. football league has a particular allure to advertisers. Commercials and campaigns surrounding the event are regularly anticipated just as highly as the happenings in the arena itself.

It should come as no surprise then, that when Ford approached Bipolar Studio to create a unique commercial experience for the Super Bowl LIII, the team jumped at the chance. Opting to skip traditional T.V. advertising, the Los Angeles-based production company devised a one of a kind, cinematic CGI VR image film, filled to the brim with breathtaking visuals, art direction and clever references to America’s favorite pastime.

Check out our interview for an exclusive look behind the scenes of the ‘Ford Super Bowl Fan Journey’.

Before we dive deeper into the details of the project, can you briefly summarize your general approach?

We wanted to move from wide shots to close ups on the Ford Trucks in one shot, all while seamlessly transitioning through multiple environments. We thought of different ways to film the project, but with everything visible in 360°, it all felt like a compromise. Ultimately, we decided to make everything entirely CG.

The NFL teams and their mascots – the Dallas Cowboys, Arizona Cardinals, Denver Broncos, and the Pittsburgh Steelers all come to life through our epic journey. We fly past the built through Ford trucks as they conquer various terrains, bringing us all the way to Atlanta, home of the Super Bowl LIII.

This was setup as a big live event with full scale Ford Trucks from our film parked at the Super Bowl for 10 days during and prior to the event.

Where did the original idea come from?

The initial broad concept came from GTB, the agency that manages the majority of Ford’s advertising campaigns. We then worked to refine and fully build out the idea, doing the concept art and storyboards. Fortunately, we were given a lot of freedom to mend and optimize the idea for VR. Since GTB trusted our expertise in VR technology, this freedom continued throughout the development process as well, allowing us to direct the camera and action as we wanted.

One of the key changes that we made to the original concept was the transitions from state to state. Initially, the plan was to fade between each and cut to the next, but we wanted to keep the experience as seamless as possible. So, we decided to introduce certain transitional elements that will help us “fly through” from one scene to the next without noticeable interruptions. 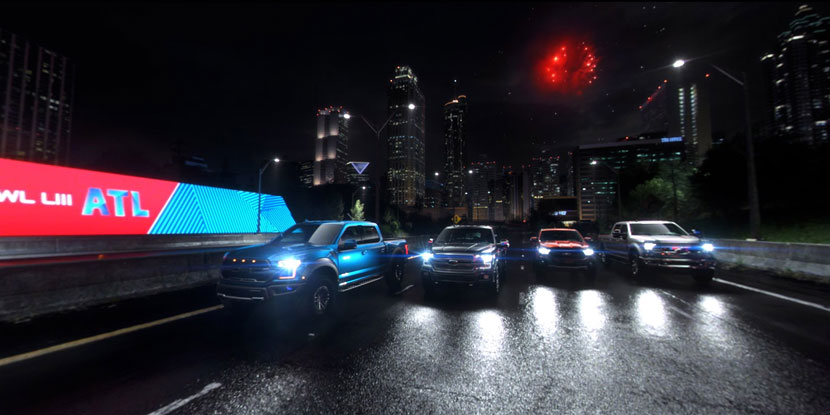 Expertly produced by the team at Bipolar Studio, the fleet arrives in Atlanta.

What was the process for developing the vehicles? Were you provided with any vehicle models or assets from Ford?

We were provided with the usual CAD models from Ford. We then had to work on optimizing, prepping and materials/textures/shaders to really bring it to life and make it photo-realistic. We focused a lot on each detail of the vehicle, from the bolts and bulbs in the headlight to everything else to really make the cars shine and look wonderful.

Did you use any reference footage or still imagery?

A lot of research went into finding the perfect references in order to set both the mood, lighting, feel, and also be clear enough to the audience to easily recognize each location as to what state it’s in. Once the references were locked, we went on to also modify and art direct them. We wanted to have a variety of mood settings, from differences in lighting, color palettes, time of year, time of day to the weather.

We wanted to create an experience with unique visuals for each state, culminating in a single stunning and unforgettable journey. We start with an atmospheric sunrise in Texas, followed by a beautiful early morning in Arizona. From there, we enjoy a fall daytime in Colorado, visit a foggy Pennsylvania after a rainy day, which is contrasted by a hot, glowing and smoky steel mill. Finally, we arrive in Atlanta to a clear and stunning evening, illuminated by fireworks. 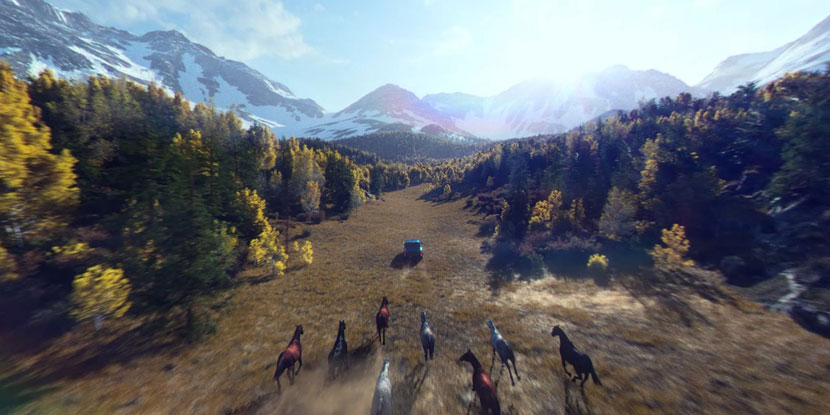 Not only an obvious allusion to the car’s horse power, the galloping steeds represent the Denver Broncos, one of the teams featured in the film.

Can you discuss more about creating the cowboy, horse and cardinal character assets? What was your animation process like?

We spent a lot of time building each of the characters. Actually, we went a bit overboard with the cowboys, meticulously building every detail, but ended up being just a bit too far away from them to clearly see it all. The cardinals, on the other hand, were only centimeters away from the camera, so we concentrated on their models a lot. We started building them from the skeleton up, adding muscles, and mimicking their anatomy. The team went on to then detail out the fur and groom every single one of the feathers. Our animation team watched many hours of reference videos studying the unique flying style of the birds.

What tools did you use during production?

One of the most important parts of bringing this project to life was actually getting all of these complex animations, scenes, simulations and vehicles to render at a massive 4k resolution in 360°. We had to lean heavily on RebusFarm and the amazingly reliable and easy to use infrastructure they have built as an extension of our pipeline. We also needed all of this rendered in a very quick turnaround; fortunately, with the thousands of nodes available at any point in time for us to crunch renders on, this was no problem whatsoever.

When outsourcing parts of a project on this scale, a reliable and immediate support structure is absolutely crucial. We’re glad to once again have received this support by your amazing team.

What hardware will the project run on?

It will run on any passive VR headset currently available, but was developed with the target headset being the Oculus Go. It will also be available online.

How did you approach this project in terms of sound design?

Sound in general was a huge element in creating the experience we envisioned. It’s that mixture between the roar and rumble of the engines, rocks crushing under the tires, the whipping breeze, the gallop of the broncos and the music that keeps pushing us along the road to Atlanta.

We also added narration from real games. As we fly state to state, following each of our selected NFL teams, we hear the roar of the fans, announcers doing play-by-plays, and exhilarating final calls of important games across the respective team’s history. This was to create a better sense of attachment to the teams and NFL football.

We used every little sound cue to add an additional layer of color and texture to the film. The finished project features spatial audio, allowing the audio to acoustically respond to the user’s head motion within the 3D soundscape we built around them. 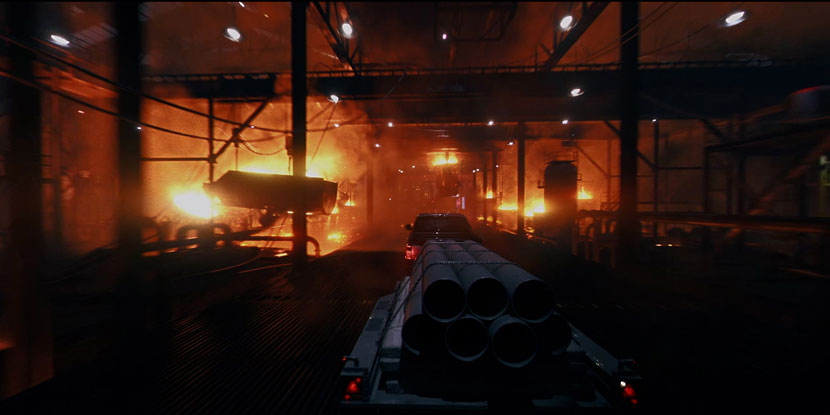 A wink to the Pittsburgh Steelers, the fiery furnaces of the steel mill provide another challenging terrain for the trucks to conquer on their journey to Atlanta.

Keep up with Bipolar Studio and their work through these channels:

Be sure to also check out our previous interview with Bipolar executive chairman David Karapetyan here!