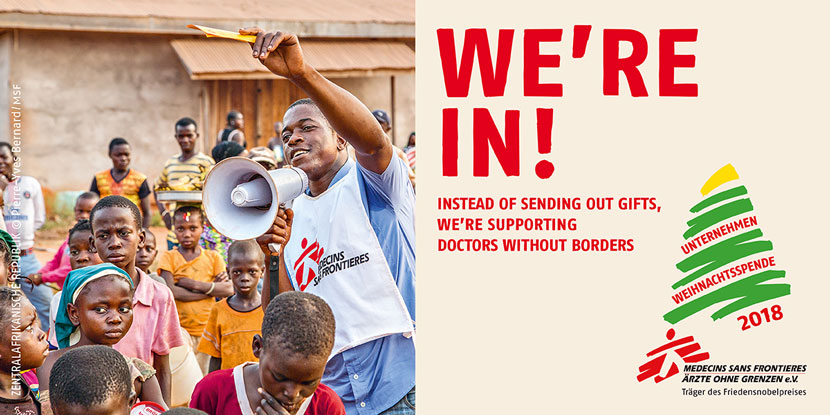 Like the past years, we will not forget about the people who are in need and struggling for their lives every day. People, young and old, who have to flee from natural disasters and violence. This is why this year we are supporting the organization DOCTORS WITHOUT BORDERS with a donation.

This organization provides food and medical aid in places where it is urgently needed.

Maybe you would like to donate something to an organization of your choice too?

Help is urgently needed in many parts of the world. DOCTORS WITHOUT BORDERS sends food and medical professionals to areas where people are struggling for survival. It doesn't matter whether they suffer from dirty water, malnutrition or disease.

Here are a few examples of the help they provide:

More than 900.000 Rohingya live in what is now the largest refugee camp in the world. DOCTORS WITHOUT BORDERS provides comprehensive emergency relief on location.

A colleague from DOCTORS WITHOUT BORDERS examines a two-month-old baby. In the overcrowded camp babies and small children are especially susceptible to contracting diarrhea and respiratory infections due to the unhygienic conditions.

Mobile teams travel to people who have been displaced and offer them medical attention. On the left, a nurse from DOCTORS WITHOUT BORDERS measures the circumference of a child’s arm in order to determine whether the child is suffering from malnutrition.

People desperately require safe water for drinking, cooking and for personal hygiene. DOCTORS WITHOUT BORDERS provides water in many locations through either drilling wells or delivering the water by truck.

In and around the city of Taiz people are living under catastrophic circumstances. The war front runs right through the city center. In this region DOCTORS WITHOUT BORDERS operates a hospital and an emergency clinic.