Ring the alarm! We have a grand theft donut in progress, courtesy of Jin Hao Villa, our June 2018 3D Artist of the Month. Hailing from the Philippines, the accomplished digital sculptor and character designer recently won first place in the lighting and rendering category in the AMD Radeon Pro Challenge for his equally comedic and surreal ‘Roach Heist’.

We sat down with Jin and talked about the pros and cons of freelancing, translucent CG insects and more. Continue reading for an indepth look at the development of his winning image – but put down the insecticide first!

Hi Jin, thanks for taking the time. To start things off, please introduce yourself to our readers!

Do you recall when and how you first fell in love with CGI?

Probably when I saw the original Toy Story for the first time in the mid-nineties. In addition, as an avid video gamer I naturally followed the progression of 3D technology and always fancied a career in the industry.

I only had one year of formal 3D training back in 2003-04 when I took a course in 3D animation and visual effects while studying at Vancouver Film School. Everything else was self taught and learned through years of experience working for several film and game studios and passion projects.

Jin sculpted this 1:6 scale statue of Mikasa from the popular anime ‘Attack on Titan’ for a 3D print client commission.

Can you tell us more about your work as a freelance digital sculptor and character artist?

As a freelancer, I provide everything from 3D modeling, sculpting and texturing for films and video games. I also work on digital sculptures for numerous 3D printing projects, mainly collectibles and board game miniatures.

In the early days of my career, I worked as a character, environment and props modeler and texture artist at Toei Animations. There, I was involved in numerous Japanese animated features and TV commercials, doing both low-polygon to high polygon work with styles ranging from anime to cinematic-live action.

In the following years, I became more and more involved in the video game industry, culminating in contributions to AAA titles such as ‘Uncharted 2’ and ‘Bioshock Infinite’.

For you personally, what are the main advantages and disadvantages as a freelancer?

The biggest advantages to me definitely are the flexibility and freedom that come with being able to organize your time and choose your own projects and clients.

The disadvantages for the most part are just standard fare of freelancing, such as dealing with ambiguous negotiations and payment terms. Of course there’s always the danger of unintentionally overloading on projects or getting sidetracked as well, sometimes even loss of interest in a project you are locked into. Regardless, the pros far outweigh the cons!

Since you are well versed in a multitude of different areas, is there a type of work in CGI or 3D you especially like?

I enjoy 3D sculpting, and shading/rendering the most for reasons I cannot fully explain. I just really like working on collectibles and statues. But as long as the base concept is cool and fun, the specifics of a job are secondary to me. Variety is the spice of life, after all!

In a similar vein, how much do the projects you have worked on in the past coincide with your own taste in media?

My taste in the media has shifted over the years and will continue to change as 3D technology progresses, but overall I’d say the projects I’m doing now line up with my personal interests pretty well. 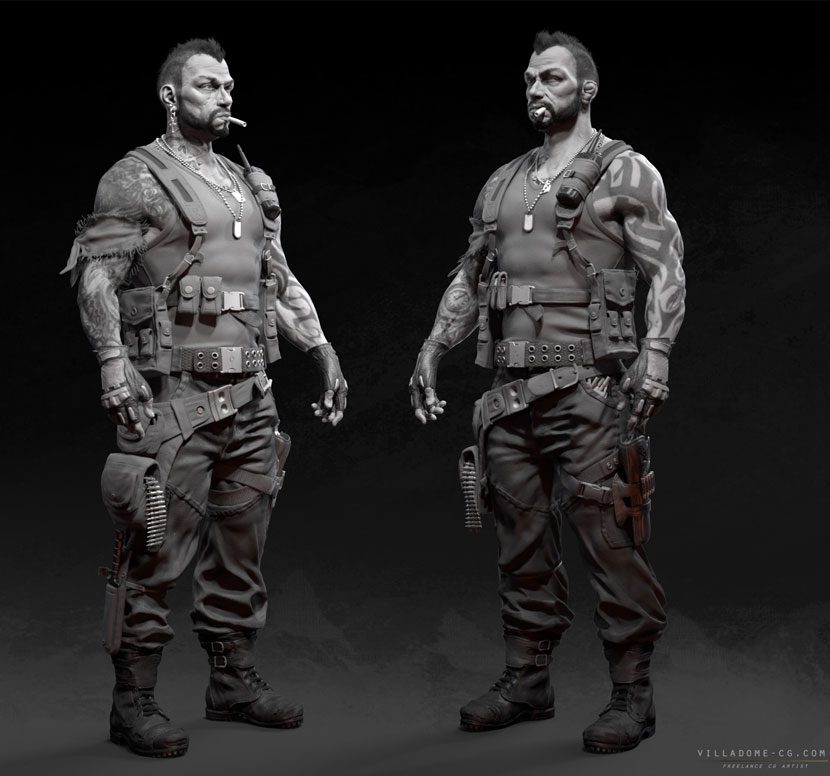 Nominated for an EXPOSÉ 12 award, this ‘Vigilante Soldier’ is Jin’s rendition of the ultimate anti-hero.

Let’s talk about your work in more detail, namely “Roach Heist”, the stunning and surreal piece that won you first place in the lighting and rendering category in the AMD Radeon Pro Challenge hosted by CGSociety.

How did you come up with the initial concept?

The basic idea had lingered in the back of my mind before ever knowing of the competition. It probably came to me from my subconscious or in a dream, and then I had a sudden passion to turn that into 3D. This particular challenge presented the perfect opportunity to finally express that.

By now, I’m aware the concept was probably influenced by a similar scene in the 90’s movie ‘Joe’s Apartment’. However I honestly didn’t realize this connection when I first thought of it.

It took around 3 weeks to do, all without using photogrammetry. The biggest challenge was getting the shading on the roaches right. Because of their multiple layers of translucency and transparency, I believe CG insects to be one of the hardest subjects to achieve in rendering software.

The donuts were also quite tricky: Finding the proper blend between glazed and dry parts definitely took some effort. 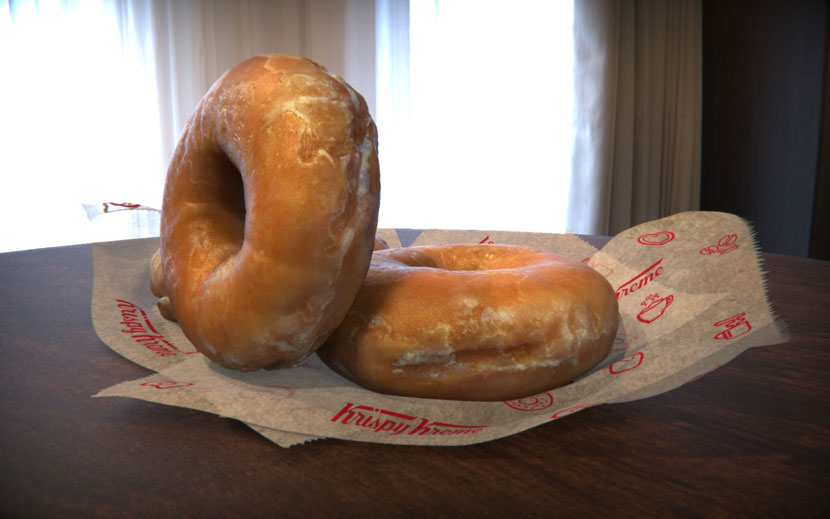 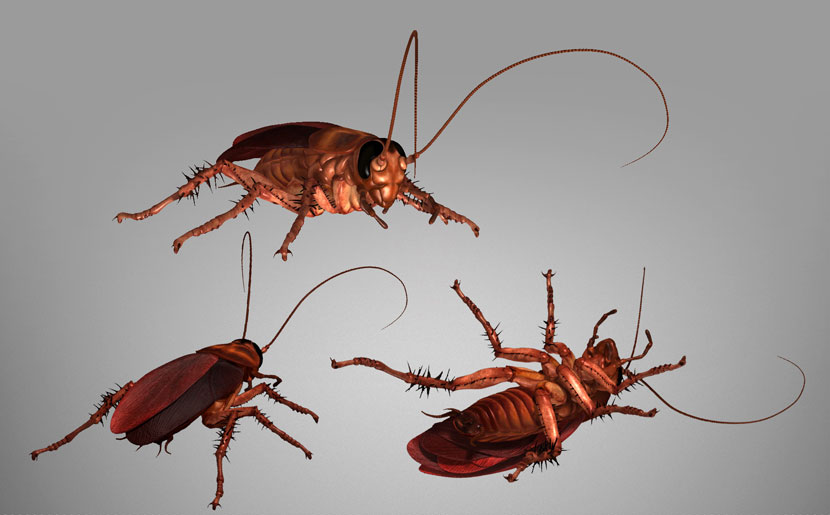 The sweet and the sour? Click for an enlarged look at the fine details on the donuts and roaches.

I’d like to dive a bit deeper into the motive and composition of the image.

There is an obvious contrast between the sugar glazed sweets and the creepy crawly roaches. Juxtaposing insects and food has a long and rich history in the arts as a theme of decay and the transitory nature of life. Did you mean to put your own twist on this imagery or am I wrong in assuming these more serious undertones?

Well, these undertones are certainly there. I wanted to contrast beauty and disgust, but not specifically in regards to the themes you mentioned. If you interpret it that way, that‘s fine too – art is subjective after all and can always be whatever the audience chooses it to be.

However, my main objective was highlighting the comedic and surreal nature of these insects being intelligent and devious enough to steal donuts in such an outlandish manner. I was aiming for a sense of “homey-heartwarming” comfort, disgustful comedy and bewilderment, all at the same time.

Following the development of the image as laid out in your thread on the CGSociety forums, you were playing around with different shots and ideas. Can you walk us through the creative process that led to the final composition?

Yeah, I explored numerous ideas before settling on the final shot. At one point there was the Krispy Kreme box, more roaches, and even flying roaches carrying the yarn ball. Ultimately I abandoned all of these additional elements, because I felt like I was overloading the scene, possibly ruining my focal point. Also I would’ve needed even more time to properly implement these objects. And since it was a rendering and not an illustration competition, I decided that time was better spent making the roaches and donuts look as good as I could. 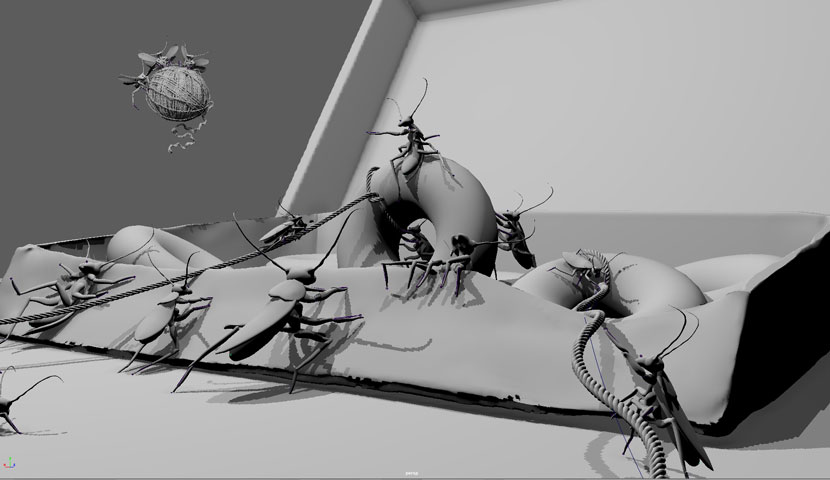 This early work-in-progress image includes a lot of elements that did not make it into the final shot.

What software did you use to create “Roach Heist”? Any plug-ins you found particularly helpful?

I used KeyShot, ZBrush, Maya, the now defunct Softimage as well as Photoshop to create it. On the plug-in side, FBX importer, GoZ and KeyShot to ZBrush Bridge allowed me to seamlessly transfer models between software, making things a lot easier overall.

How important are competitions such as the AMD Radeon Pro Challenge to you as a 3D artist?

‘Roach Heist’ was one of my most successful images, and some of the most fun I had recently. On top of that, it made me look into learning photogrammetry. With this method, I will definitely continue building on this idea of having even bigger and better surreal scenes with cockroaches in more of my future projects. 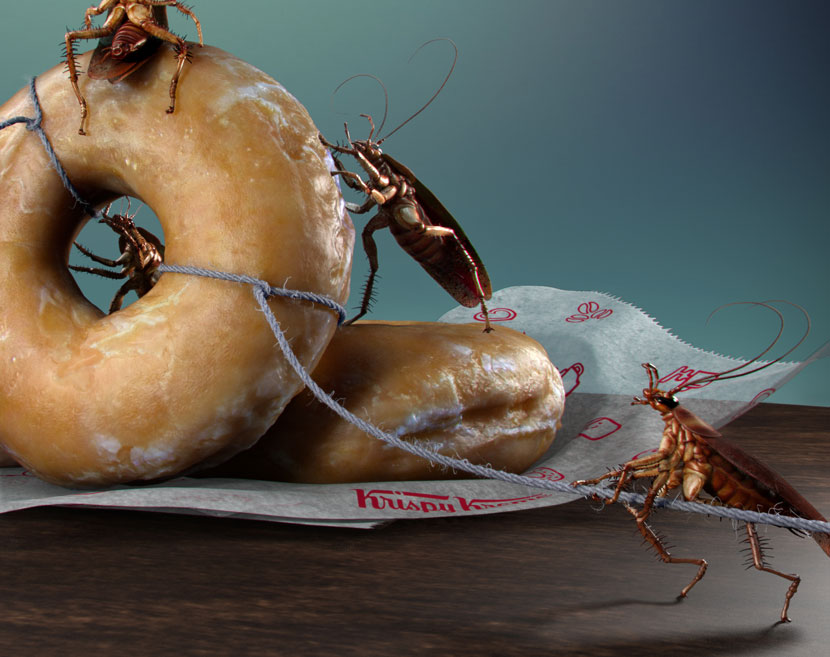 Jin tells us there is more creepy-crawly goodness coming our way in the form of future projects.

Currently I’m working for Interplay Entertainment on one of their upcoming games. While I can’t go into more detail at this point in time, let me just say it will be something to look forward to for fans of the company’s classic RPG series such as Baldur’s Gate, Neverwinter Nights and Icewind Dale.

Thank you so much for the interview and all the best in the future.

Keep up with Jin’s work here: