He originally created his winning image for the architectural rendering competition “Project Soane” earlier this year.
Given only a simplified 3D model of the building, Rostislav and his team created their version of the Bank Of England – built by Sir John Soane at the end of the 18th century – and won Best Video! Congrats!

As it's always interesting to know the story behind, we asked Rostislav to tell us something about his background in general and his amazing project.

Rostislav, thank you for taking the time! We'd like to know more about yourself and your work. Your skills, what kind of subjects you like most to create in 3D, your experiences and so on. Go ahead!

Thank you! I started working in 3D visualization by the end of 2010. I got an architectural education but unfortunately, the institute didn't really inspire me to become an architect. Anyway, I've always liked to make beautiful-looking projects, so I got into learning visualization. Finally, I moved to Moscow to start working full time.

At the same time, I studied at the State Of Art Academy in Italy, which inspired me to officially found my own studio.
This enabled me to do both, commissioned work and my own creative projects.
In the studio, we offer all kinds of services, concerning the field of 3D: exterior and interior visualization, videos, 360° panoramas, interactive visualization with a full immersion in Unreal Engine.
Please, check our portfolio on Behance and Vimeo.

Personally, I'm into doing the small, natural details. Enriching a project with this breath of life it takes to become even more realistic. 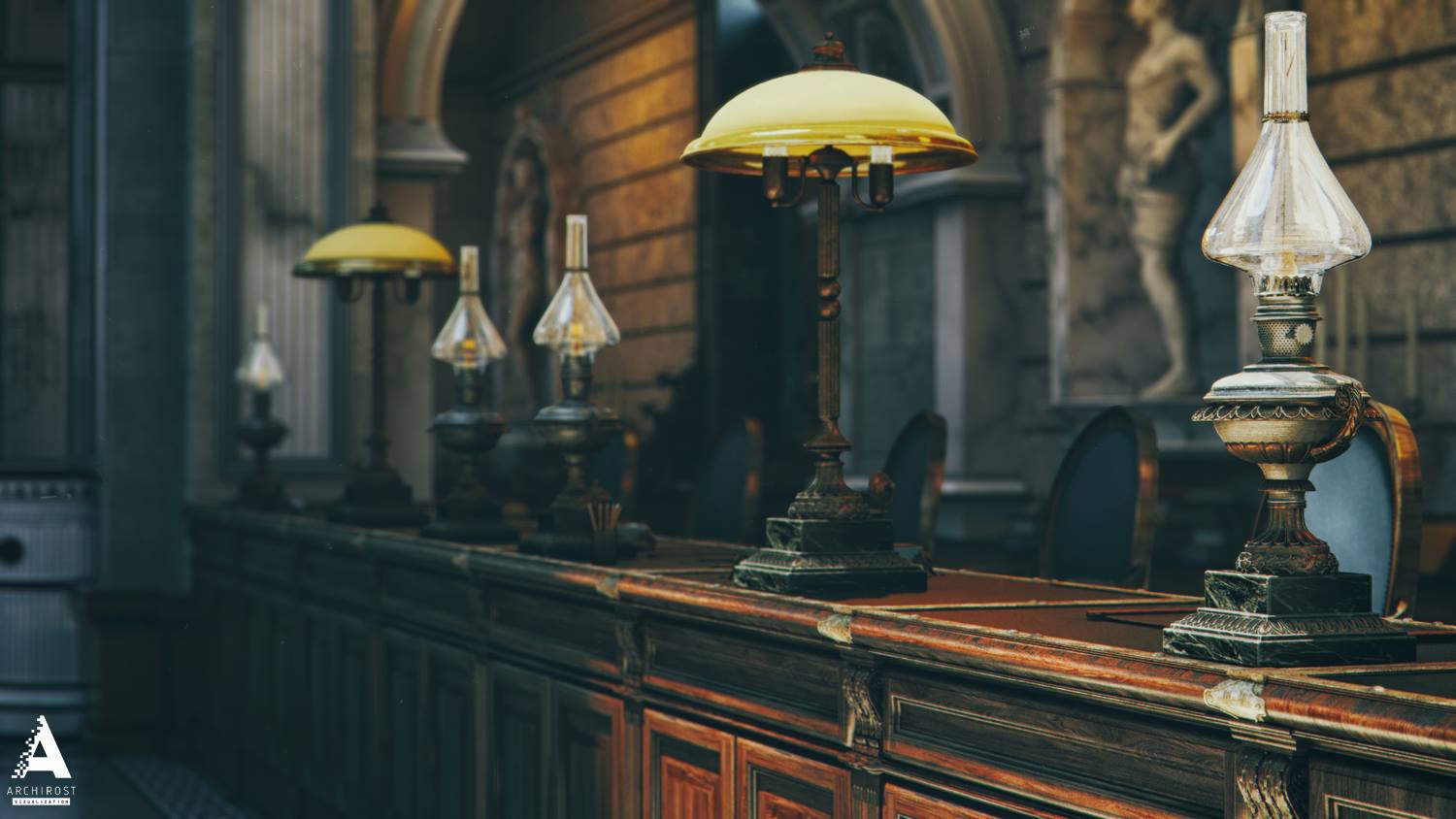 Let's now talk about your winning image. Which software did you use for the work? Is there something special to mention about the creation process and the programs?

We used a standard set of programs to keep the workflow smooth: 3dsmax, Corona, Adobe Photoshop and Adobe After Effects, that's it. Concerning the process of creation, we wrote a small making-of on Behance, check here.

What is the idea behind the picture you've handed in for our Artist of the Month contest?

As usual, I did an extensive research, as I wanted to create a very detailed visualization. I looked up archival photographs and drawings, watched movies. I even played “Assassin Creed Syndicate” as it has one mission to be completed in the Bank of England.
To memorably distinguish my works from others', I filled the hall with ghosts and animals and flooded it with water.
I like to see historic architecture being put into modernized contexts, as e.g. “La Iglesia Skate” in Spain.

For the video, I originally had the idea of a ray of light, sliding over the architecture. Making it new and renovated instead of old and abandoned. But there was just not enough time for this. The main task was a straight reconstruction, so my final video doesn't have this memorable “twist”.

You've worked with Rebus Render Farm in the past. Please tell us more about your experience. What do you like about rendering at RebusFarm?

We've worked with RebusFarm a couple of times as big projects always need to be rendered fast. We use top assembled computers which do not have enough capacity for large projects, though.
Fortunately, there's RebusFarm. You can always run a test render in advance and see if you set up the scene correctly, which is very convenient. I like the fact that everything is automated, the entire process can be monitored online constantly.

In conclusion - is there anything else you'd like to add about yourself and your projects?

About a year ago, I participated in the competition "Vineyard”, wherefore I studied Unreal Engine.
I'm a fast learner and I really like this program.
Interactively walking through your project is amazing. Especially with virtual reality glasses by Occulus Rift - I did not expect the effect of the glasses to be so realistic. So now in the studio, we can also implement projects in Unreal Engine and virtual reality.

I always wonder how other visualizers manage their personal projects. I know myself that in the middle of doing a commercial job, there are no resources (time, energy, inspiration...) for personal work. For me, each personal project means working a few months in the evenings and at weekends. I'm very lucky to have my wife supporting me. She also works in the studio and tolerates all these crazy schedules.

Coming back to the “Project Soane" contest, working on it was extra-challenging for me, as I was also preparing for a big triathlon! :D

You want to be our next featured 3D Artist of the Month during the upcoming month of October and win 250 Renderpoints? Then, just visit our facebook page, upload one of your self-made 3D images and send us a personal message containing your email address. We'll choose the best image and contact the winner.