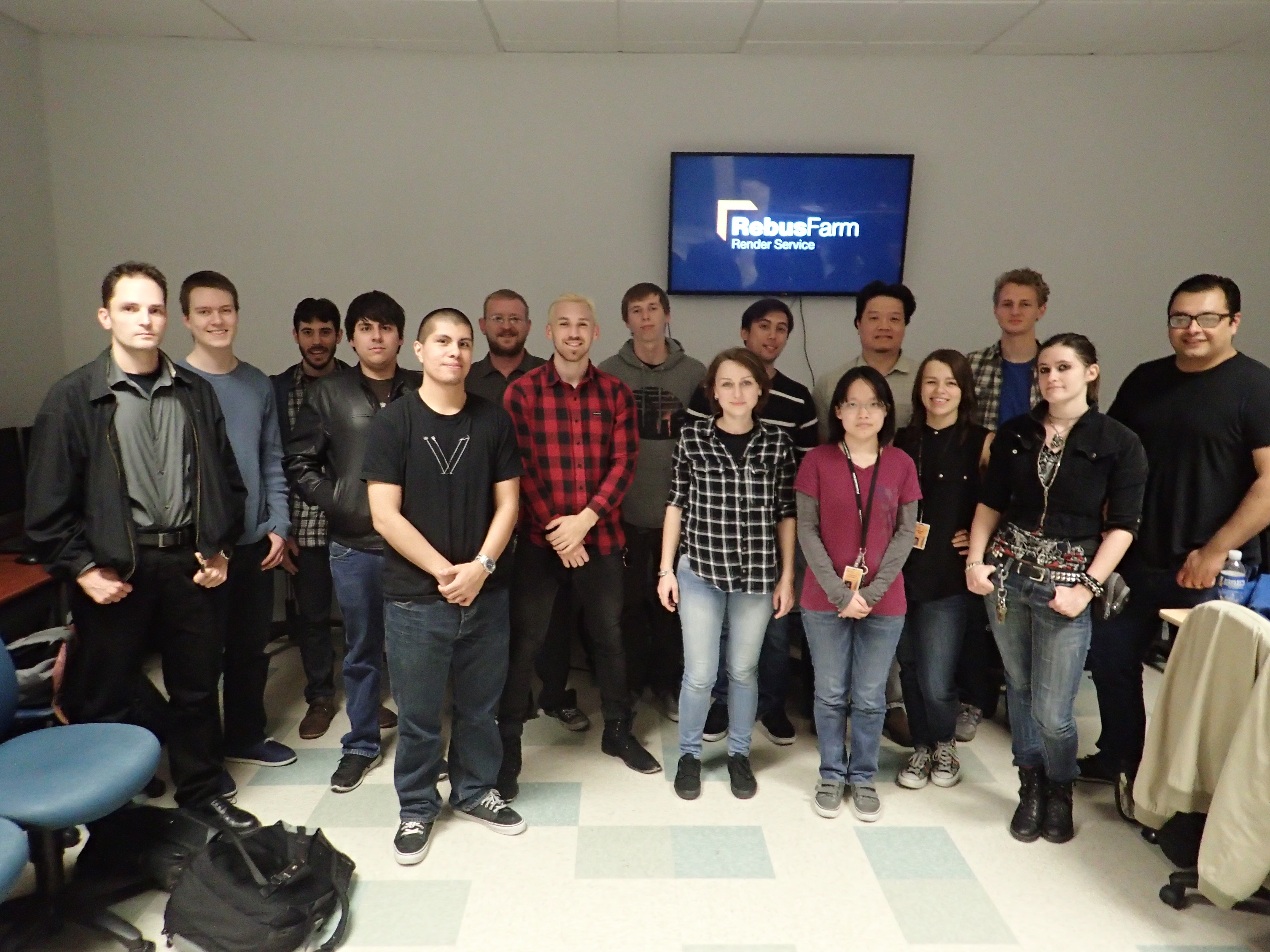 You might ask yourself what this title is all about. Well, it's been a while now since we kind of secretly started this little project with a group of students from the Cogswell College course "MediaWorks". The Digital Media School is based in the heart of Silicon Valley in California. "Media Works" is a collaborative program that brings together students from the Audio and 3D Departments. The aim of the project is typical to create a short audiovisual piece for a partner organization. Students are asked to produce animated logo short movies or sequences that include sound design, original music, and animation. They must work through the entire production process, complete with real-life client meetings, creative briefing, concept generation, participation in the approval process, project and time management, deadlines and full-scale production individually, in teams and cross-teams.

Together with Anthony Dias and Julius Dobos, the co-directors of Cogswell "MediaWorks" we challenged the students to create a short animated movie sequence of our RebusFarm logo. While Anthony focused on leading the visual students, Julius directed the Audio students. Together, they helped them discover the needs of the client and develop original concepts that were submitted to the client for feedback, refinement, execution and delivery. The whole production was sponsored by RebusFarm and Maggie Kitel, our Marketing Manager, who also had the chance to visit the students personally during her educational stay in the US.

Anthony Dias will give you a short overview of the student module and their storyboards: "At the beginning of the project, we wanted to get ideas out very quickly. The entire team of about 16 people separated into smaller teams of two to three consisting of at least one audio and one visual team member. Each sub-team then came up with one or two ideas and then presented them to the rest of the group. We then voted and by the process of elimination came up with four concepts that everyone really liked. The teams then separated into new groups consisting of the main concept writers and a dedicated artist for that team to be in charge of the storyboard. The four concepts received written audio direction and storyboards in color created before the week's end. They were then sent over to RebusFarm to review." Julius Dobos adds: "On the Audio side, to create a healthy competition and real-life scenario, students worked individually, each trying to gather as much information as possible, to win the client's approval. They had to start from a blank canvas and create original sound design and music from scratch. Their most challenging task was the synthesis of lightning striking, which everyone accomplished in a different way."

We also took the chance to talk to some of the students about their experiences during the project. Jimmy Henry Frando, the Project Manager, was one of them: "One of the biggest highlights for me was being able to use and integrate your rendering service into our pipeline. Not only did it help us increase the speed and efficiency of our project, but it allowed me to really understand the power and service that your company provides." Jimmy also told us about some challenges he had to face: "One of the challenges I faced during this project was working with the  Paint Effects Tool in Maya. Once you get the object, in this case, a lightning bolt, in the 3D scene using this tool, you can tweak an enormous amount of settings for it. It was extremely overwhelming at first and it took me a while to really understand how certain attributes changed it." He also mentioned that he absolutely did benefit from the whole set-up: "As RebusFarm is located in Germany it was really quite unique working with a company outside the United States. This experience was completely different from my class projects where I usually work alone and the range of skills developed are small. In comparison, working with RebusFarm gave me an opportunity to collaborate with a team and allowed me to develop a larger spectrum of proficiency."

Charlene Teets, Jr. Project Manager, described her role as follows: "I was the Assistant Project Manager and my role was to ensure that communication within and between the audio team and the visual team was clear, consistent and acknowledged. I also worked on any art aspect that needed to be completed or helped with. I personally got to work hands-on with the technical director with the creation of the particles forming and I learned a lot about dynamics. This project also required a large amount of rendering and I learned a lot about that aspect as well." Charlene was actually managing the organization if the whole team and faced quite a few challenges; "Anytime something was going wrong I would need to help to find answers. Since this was my first project management role I was working on better ways to communicate what the team had to do and in what time span. One of the challenges we faced was learning how to render efficiently by messing with settings and render layers." She told us that the best moment was when they saw the last render altogether with music. "The audio just made it come to life! It made me feel like we did a good job." Media Works is a completely different experience when compared to the average class offered at Cogswell College. The studio gives the students a real world experience with how to complete a real project with a real client.

Mitchell Lincoln was the student responsible for the chosen sound design and music and aimed to build a completely futuristic sound. "The main challenges I had were trying to emphasize the weight in parts of the objects on the screen, along with digitally designing the sound of thunder. My favorite part was recording myself throwing a metal trash can to use as a sample for the lightning. It was a great experience to be able to sit down with Maggie Kitel from RebusFarm and go over the early concepts. My intent with the sound design was to create a unique environment that properly represented what you see on screen. Given that it's more of a science fiction related idea, it took a lot of thinking to fully put together the audio for the final piece." The audio students were assigned to against each other, each one aiming to create the perfect sound effects and music for the animated logo for RebusFarm. "For me, since I had been a member of the Media Works team for six prior projects, the biggest difference was the competitive nature along with the aspect of it being a solo project. Each member created their own version and we aimed to keep the complete secrecy of our ideas until the final presentation day."

Nicolas Hall, another shining sound designer-composer found out about the importance of soft-skills: "Working on RebusFarms project was a truly gratifying experience. During my time with the project, I've learned things about myself and others that I would never have got from anywhere else. This project opened my eyes to the fact that the human element is just as important if not more important than the professional work itself."

David Forbes Feldstein was the Art Lead for this project. "My role was to guide the team to match the aesthetics of the concept. One of my biggest learning experiences was overcoming the technical challenges we faced during production. Most of the members of the visual team were inexperienced with 3D dynamics, which was a very important aspect of this project of course. We turned to Peter Mo, our technical director, to learn all about it and help us through to the end." David also experienced that having the correct settings when it comes to rendering is very important: "During the final stages of production, we started to do final renders through RebusFarm's render service and once we initialized rendering we hit a problem. We didn't have enough credit and went over 1200 negative RenderPoints. We were shocked, but were told that this is totally normal and RebusFarm helped us out to perfect our settings." David actually created the concept that was finally chosen by us. "Since I created the concept that was chosen, I had a particular sound in mind that was appropriate for a digital environment. We had plenty of audio students who went above what I imagined and my favorite piece was, in fact, the one that was chosen in the end."

We're happy to show you the final result created by this ambitious group of students. Thanks to all of you for your effort and hard work you put into finalizing this project.